You are not connected. Please login or register
Go to page :

** Interlude I - Instead, austere and corpse-white 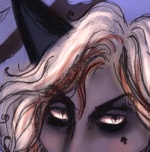 Re: ** Interlude I - Instead, austere and corpse-white

Fabien grey eyes followed the slow sweep of her hand with the merest hint of amusement curling at the corners of his mouth. A soft sigh then parted the boy’s lips, and the back of his skull connected with the wall in a gently thud. He briefly pinched his eyes shut, inadvertently allowing her inspection of his burned wrist to go unnoticed.

When the urchin’s bruised eyes re-opened, they were focused back upon the girl with sharp intensity. Her answer affected a sudden change upon his features, darkening the hollows of his skull until it seemed as though every light source had begun to wane. He fixated upon the ends of her fingertips as they gestured around the room, until his haunted gaze was slipping over every corner of his new prison. The boy’s lower lip quivered in silent horror, every muscle in his youthful face pulled taut with concern. Beads of sweat had begun to bind the hand-me-down shirt to his spine, rolling down the length of his youthful skin. He swallowed firmly, and acknowledged her answer with a stiff nod.

The boy did not interrupt her stillness. He appeared briefly consumed by his own terrible thoughts, and his eyes were turned down towards her feet. It was only when it seemed like she might provide an answer, might speak to him, that his gaze lifted.
The youth’s grey eyes followed the course of her hand, and his eyes lowered sharply down towards his chest. They lifted in time to watch her slender finger slice across her throat.

“What? I... what do you mean?” he rasped, a little more sharply than he would have liked. But when it seemed she meant to leave, he quickly became gentle and pleading. “Non non, wait, not yet, don’t go just yet.”

It was clear that had he the means to do so, the boy would have leapt after her. He instinctively lurched forward energetically, one slim leg sliding from the bed whilst his bare toes sought the floor. But the sudden flexing of muscles, of movement, left the youth hissing in pain. He crossed an arm over his chest in order to apply tender pressure to the wound at his throat.

When he raised his head again, Colombe had already abandoned him to the solace of her brother's room. But her presence remained haunting the walls, her disquieting scent lingering still on the air. The boy’s eyes remained steady on the door for a long time after, his features half shrouded beneath his hair. Both occupants of this house had left their mark upon him. The boy appeared so much more wane, so much more exhausted than before, as though all life had been drained from his skin and eyes.